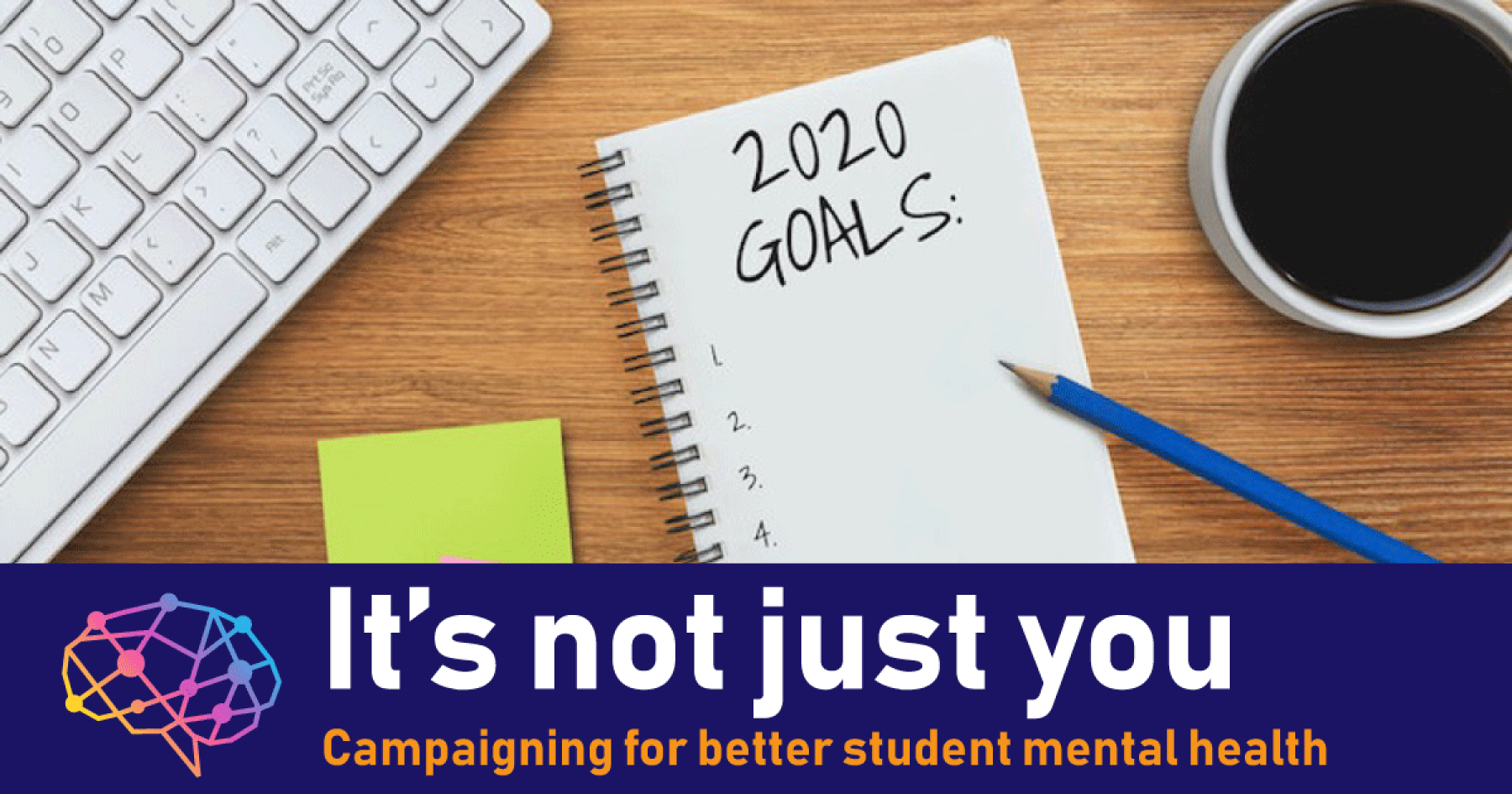 January is almost over - finally! VP Welfare, Seoras Hearton has reflected on experiences with New Year Resolutions and the effect it can have on your confidence. This blog is part of a campaign to highlight experiences of Edinburgh College students to celebrate differences. The campaign aims to show that #ItsNotJustYou.

The clock struck midnight and we are into a New Year and new decade. For the business world, once the New Year begins companies will flood their marketing with “New Year, New You” advertising campaigns. Cafés will push you to pick healthier options mere days after promoting Christmas treats loaded with chocolate and caramel. Gyms will push people to ‘stick to their resolutions’ and offer expensive new packages. Even bookstores will place diet books and healthy lifestyle guides in unmissable places to ensure the pressure of change creates profit. From a business standpoint taking advantage of this generated feeling of ‘now it’s a new year I can fix all my problems’ makes sense. However the root cause of the feeling itself is the problem to be addressed.

I have struggled this time of year personally. Setting a goal of going to the gym 4 times a week and saying I would pay off my loans within 6 months through saving. These goals sound good on a resolution list, but in practice were hard to balance with life. If balancing education, social life and my job caused me to miss a day where I said I would be at the gym, it would demoralise me. I would have failed to hit my goal and in my head that was as bad as if I had never gone to the gym. An unexpected pet bill could push back my savings by two months of work. Despite having saved the money to cover this, all I could think about was how it was now impossible to meet my financial goal.

My personal victories had become failures because they did not meet the expectations of my New Year goals. Instead of celebrating that I was going to the gym weekly and saving enough to cover unexpected hardships, all I could think about how I had not been to the gym enough or how there wasn’t enough money in my savings account. My New Year goals had become an unhealthy obsession that I measured everything I did against.

New Year resolutions are an inherently flawed method of self-improvement, one that ignores circumstances of both physical and mental wellbeing and pressures people to cold-turkey their way to whatever they think is a perfect version of themselves. Crafting a list of resolutions is akin to drafting a contract binding you to fix your perceived ‘worst aspects’ under threat of a personal, or even social failure. Problems like financial struggles and stressful schedules are complicated issues, requiring time and support to fix. However having these as New Year’s resolutions makes them seem simple on the outside, disguising a complicated problem as one with a simple solution is a recipe for disappointment and self-doubt.

If a person has any sort of perceived body image issue or eating disorder then this part of the year can be even more of a struggle. Taking someone who already puts a massive amount of pressure on themselves to look a certain way and adding in this ritual that gives validity to what may be an entirely subjective flaw can be incredibly damaging. The fear of ‘failing the resolutions’ will only end up creating more negative feelings to damage a person’s self-confidence.

If you decide to work on improving your health or lifestyle this new year. Please do not go down the path that many, including myself, have done. Do so safely and with a kind eye. Setting reasonable, smaller goals will not only boost your confidence as they are less insurmountable, they will likely get you to where you want to be faster. A gentle incline is always more manageable than a sheer cliff face.
Many people will always see flaws in themselves, even if they are not there. If you put fixing that ‘flaw’ as your goalpost it can lead to an unending chase that will only make you feel worse. The most important takeaway from this should be to treat yourself with kindness. If you only do half an hour of work instead of an hour, focus on the fact that it’s half an hour more than you ever did. Creating an obsession over a resolution stops you from seeing all the things you have done. Even though it’s a New Year, you are still you. This year will have ups and downs just like every other year. As long as you don’t pressure yourself to be different, you may find yourself growing and improving in ways that you would never stick on an unadaptable list.

This article is part of the #ItsNotJustYou campaign run by students to help other students find themselves and understand the differences that make Edinburgh College students brilliant. Stay tuned for more articles from students sharing their experiences as well as acitivities to highlight the support available. If you have a story you would like to share about your time as a student or about a topic you think people should know more about, get in touch!

Come and meet ECSA staff to find out more about running in our elections to be a student officer.

We will be hosting a day of fuel-efficient driver training on Tuesday 25th February at Granton campus. There are 1 hour slots that any current Edinburgh College student can sign up for, simply go to ecsa.scot/driving

Come and meet ECSA staff to find out more about running in our elections to be a student officer.

We will be hosting a day of fuel-efficient driver training on Wednesday 26th February at Milton Road campus. There are 1 hour slots that any current Edinburgh College student can sign up for, simply go to ecsa.scot/driving

This is the 4th Class Rep Conference of the year. We'll be discussing Success and Progression and hope to see you there.

This is the 4th Class Rep Conference of the year. We'll be discussing Success and Progression and hope to see you there.